Students have been separated into groups of ten. The groups have been talking about different themes that were: happiness, essential institutions, culture, human rights, entertainment, and values. Members of each group had to do some research about their theme and they also had to write it down. They were talking about subjects related to the theme of the group.

In culture, for example, they talked about keeping or not keeping old customs and habits, they figured that everyone was unanimous about keeping them, but they thought about changing them or making them more suitable for today’s standards.

In the group of most important institutions we have been talking about indispensable institutions Here are some of them: UNICEF helping kids from families that are not rich, amnesty international-an organization helping people damaged by violence, wars, and other human rights violations, Greenpeace that is helping the environment…

In a group about human rights, we were discussing why human rights are important, and we came to the conclusion they are important for peace and well-being. We also debated what they even are and what are their characteristics. We figured out that they are something nobody can take away from other people, they belong to each human being, just as they were born. It isn’t something you earn or fight for. They are universal. Now that we know what they mean and why they are important, which of them are the most important for us as an individual? We had different answers, but all of them were important. Some of them were: personal space or freedom of discrimination, freedom of slavery, innocent till proven guilty, equality for everybody no matter their gender, race, religion, or nationality, the right of political freedom (right to vote), etc. We were thinking if anybody’s human rights were taken away or violated and we talked about it.

In the group Entertainment, we mostly talk about the perfect sport for the perfect society. We talked about what sport is perfect for everyone. A sport multiple people can play together, a sport that can be competitive but also laid back and soothing. We brainstormed about different sports until one of us brought up “Kubb” or “Wikingerschach”. Kubb is a lawn game where the objective is to knock over wooden blocks (kubbar) by throwing wooden batons (kastpinnar) at them. The play takes place on a small rectangular playing field, known as a “pitch”. “Kubbs” are placed at both ends of the pitch, and the “king”, a larger wooden block, is placed in the middle of the pitch. Some rules vary from country to country and from region to region, but the ultimate objective of the game is to knock over the “kubbs” on the opposing side of the pitch, and then to knock over the “king”, before the opponent does. Games can last from five minutes to well over an hour. The game can be played on a variety of surfaces such as grass, sand, concrete, snow, or even ice. After we settled for “Kubb” the time we had to discuss entertainment was already over. We then got back together with the other groups and presented the outcome of our discussion. After every group presented their results, we finished the meeting.

In our meetings we were also talking about VALUES, what they are and how are they important for our lives. We came up to decision that values are a person´s principles or standards of behaviour, one´s judgement of what is important in life. We also made a questionnaire for students and for parents in schools and they both agreed on that that the RESPECT is one of the most important, because if you want to feel safe in society it is really important to be respected but also respect others. People should respect each other, should not laugh if someone is different and should accept everyone. Another important value is EQUALITY, and this means that people should be equal in status, rights and opportunities. SOLIDARITY which is agreement of feeling or action, especially among individuals with a common interest is also very important. So, at the end of the meeting, we created this list of m ost important values for happy society and those are listed here:

When we arrived to Strasbourg and find our hotel we had a small break.

Our group was very hungry after that four hour long way. We found a restaurant with

delicious foods and our teacher decided to eat lunch at here.

After the great lunch we go to look around in the city.

meeting with the other countries almost started without Hungary.

(By the way it started without Slovakia because they are still traveling.)

We give our presents to the other people and then we started to do our tasks.

After a few moments, we had lunch and then we continued to work.

At the end of the day, we went to a street with full of souvenir shops and we buy kind

presents for our parents and friends.

In the morning we visited the building of Council Of Europe.

We were watched movies about the EU and about the building.

After that, we went to a restaurant near the Cathedral and then our group (with lating)

went to the Grand Hotel to do the daily Workshop.

When the teacher said: “We work enough today.” we went to a sightseeing boat trip with

At the end of the day we had dinner and went to sleep.

When we came to Strasbourg after a long trip, we met with other countries in another hotel. We had some ice breaking activities, then we were separated to groups:

1. The group is creating a manual for happiness, they need to make a poster for the presentation at the end of the meeting in Strasbourg. Firstly they’re trying to define what’s happiness, what makes them happy … Then they’re making a list / photo presentation of the things that make them happy like, family, friends, good grades etc. . And after that, they want to make a few notes, how to make your self happy, and about self care.

2. The second group is creating a list of woman rights that they want to implement. They’re firstly making a list of a few ones that are already implemented in the system. Then they’ll start to brainstorm ideas and write them down. After that they’ll separate the good ideas and the bad ones.

3. The third group is the webpage group, they’ll sustain the website, write daily blogs, reports of meetings and overall updating outsiders, and keeping them up to date with the project.

4. The fourth one is thinking about media. How should they act in disaster situations like whats happening in Ukraine, can they even talk uncensored, should they always tell the truth. They also touched on the social media, should they let their users to upload anything, should they censure messages in other countries etc.

5. The fifth group is working on a dictionary of happiness. They need to find some words that are associated with happiness, and they also decided to make some photos of this words. They separated in 2 smaller teams, one is taking the photos in the nature, one is writing the words for the dictionary

6. The sixth group is thinking about the ways we as a part of a society can contribute to the fight again racism. They figured that most of the time, people don’t get that others are people too, so we should educate them.

7. The seventh group is trying to inform people, that knowing your first language, and also other languages at least a bit, is good, it will be easier to learn new ones. They also are making a little list of words in their languages like: German, Slovenian, Slovakian, Hungarian …

So every group is working on its own. In every group there is at least 1 member of every country, but sometimes there’s multiple. We talk in English, and that’s how we met new friends. Everyday we have an hour where we can present the work we did that day to other groups, and we can exchange feedback. We also have some breaks, when we can hang out together, but sometimes we forget about the breaks, cause we’re working. 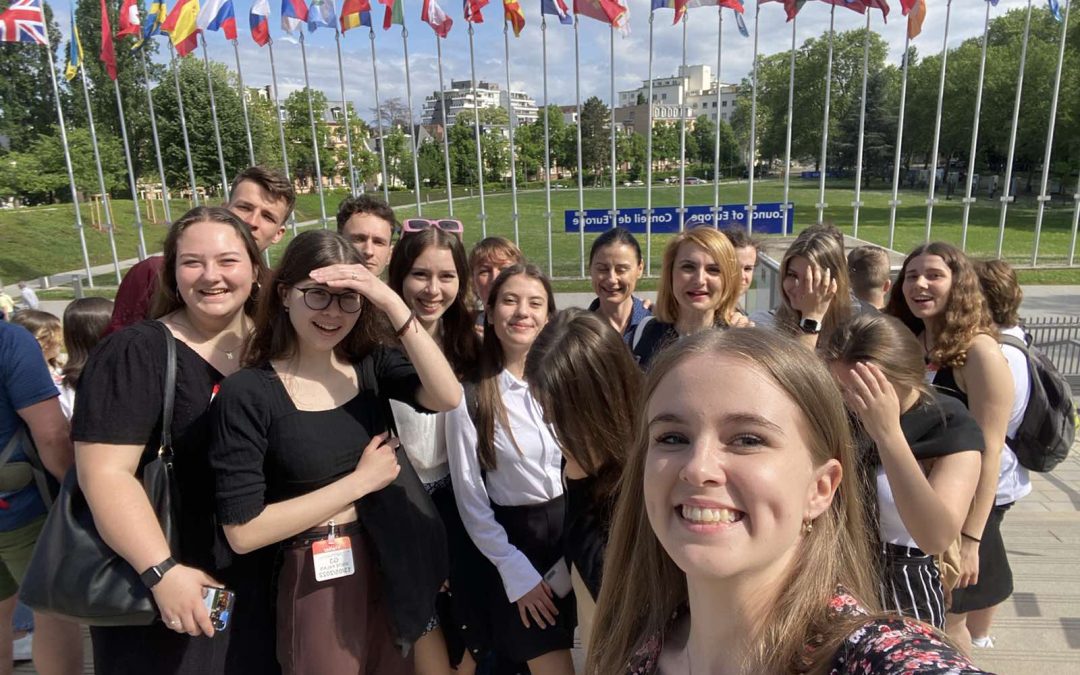 Our trip to Strasbourg started on Wednesday at Kosice airport. We flew to Vienna by plane, where
we waited about 2 hours for the next plane to Basel. Here, we managed to buy some snacks to ease
our hunger. After we arrived in Basel, we got to the train station and took the train to Strasbourg. The
journey was beautiful, however it was very long. So, it was about 11 PM when we finally reached
Strasbourg. Then, we followed the navigation to the hotel, and there we immediately fell asleep, because
the journey was exhausting.

On Thursday we went on a sightseeing tour of the European Court of Human Rights. Luckily we had a
Slovak guide that made it easier to understand, so the trip was enriching and fascinating. On the
other hand, we sadly missed the first half of the Erasmus meeting. After our lunch, the second half of
the meeting had begun. We did some interesting stuff there and when the meeting ended, we again
went to the city, to eat, to buy some food for later and just wander around. We discovered the
beauties of Strasbourg such as the Notre Dame, Le petit France, and much more. Later in the night, we
had some ice-breaking activities inside our group.

On Friday we went to the European Council together with the whole Erasmus group. At first, we got a bit
lost, because we thought that we were going to the European parliament. After an interesting
presentation inside the European Council, we took the bus back to the center of Strasbourg and went
to have lunch. Then the second meeting started. When the meeting had ended, we went to the city once
again, but this time it wasn’t about shopping. We wanted to find someplace where we could watch a
hockey match between Slovakia and France. Our team won so we were truly happy. In the evening
we came back to the hotel where we spent the rest of the day playing games and having fun. 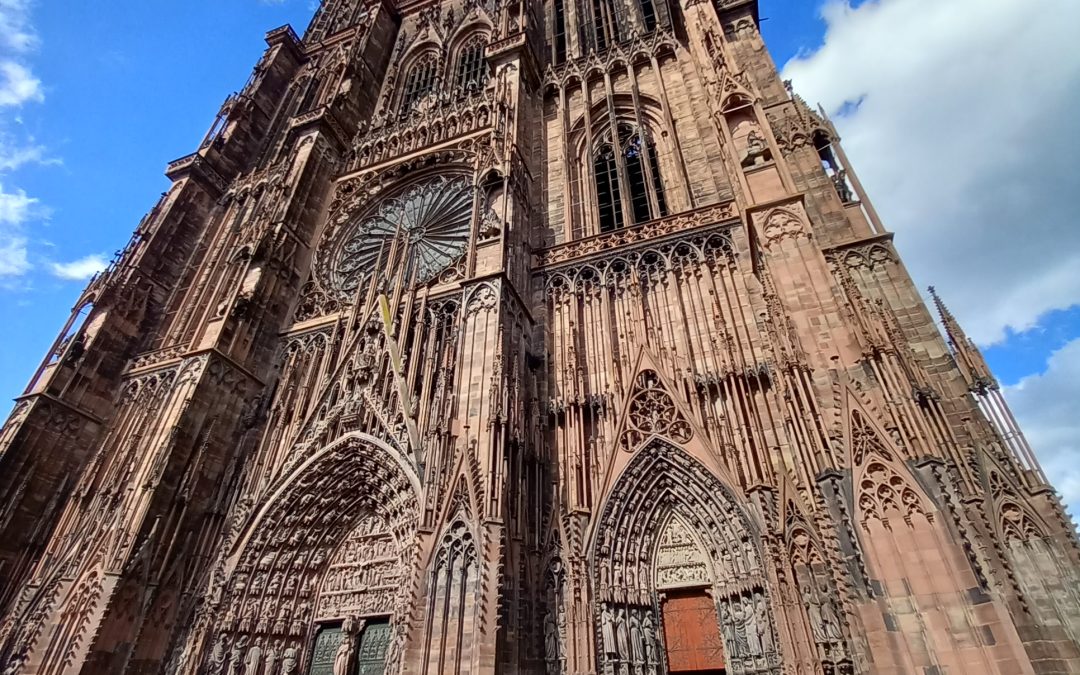 Our slovenian group arrived in Strasbourg at 21:00. First we  settled down at a hotel. Then about ten o`clock we went outside to find something to eat. We found a pizzeria, but we waited a long time for pizza and returned to the hotel at midnight.

The next day we met with other project members and after the meeting we returned to a hotel. After that we went outside for lunch but we splitted in two groups. First group went to a ˝fancy restaurant˝ and another group made up of boys went for kebabs. In the evening we went into the city center for dinner and we went to see the city sights. We also tried the traditional alsacian food the Flammekueche or tarte flambée.

On Friday we went to see European council and after that we went to a delicious lunch. At around five o`clock we went to town to visit some landmarks. We also visited a majestic cathedral Notre-Dame, and we went shopping. We also spent some time by the river Rhine.

Finally Saturday came and even though the weekend started, but we still had to work hard and finish the project work. We also went to city center again and we took a boat trip.

After the 1st meeting the famous Covid-19 hit the whole world hard, and everything started slowing down. The same happened to our project, it slowed down. So we started a small project, where students needed to write an essay about the current Covid-19 situation and how it changed our life. We then made a webpage where we uploaded the essays on.

If you want to read our essays click here >